ANY talk of the property market easing appears to be premature as we have just posted our second strongest month ever for the Ray White Group.  The group has actually now recorded three personal bests in this financial year with November, March and now May sales revenue coming in at $4.4 billion, compared to $3.74 billion in April.  This figure now confirms the second highest ever month for the group, after March came in at $4.6 billion. In the year to May, we have finalised a total of $40.9 billion, which includes all residential and commercial sales in Australia and New Zealand, plus Indonesia and Rural.

So it appears that April was just a breather as people rested over Easter. With all the public holidays, April only had 17 working days and perhaps as low as just 12 days as many people took extra time off, so the stride of the market was definitely broken. But the market got its rhythm back in May. Nationally, the auction clearance rate in fact rose to 77.2 per cent up from 72.8 per cent last week – the strongest result in two months.

Results for the powerhouse state of NSW came in at $1.27 billion which was 18 per cent higher than the same time last year in a market where stock levels continue to tighten. 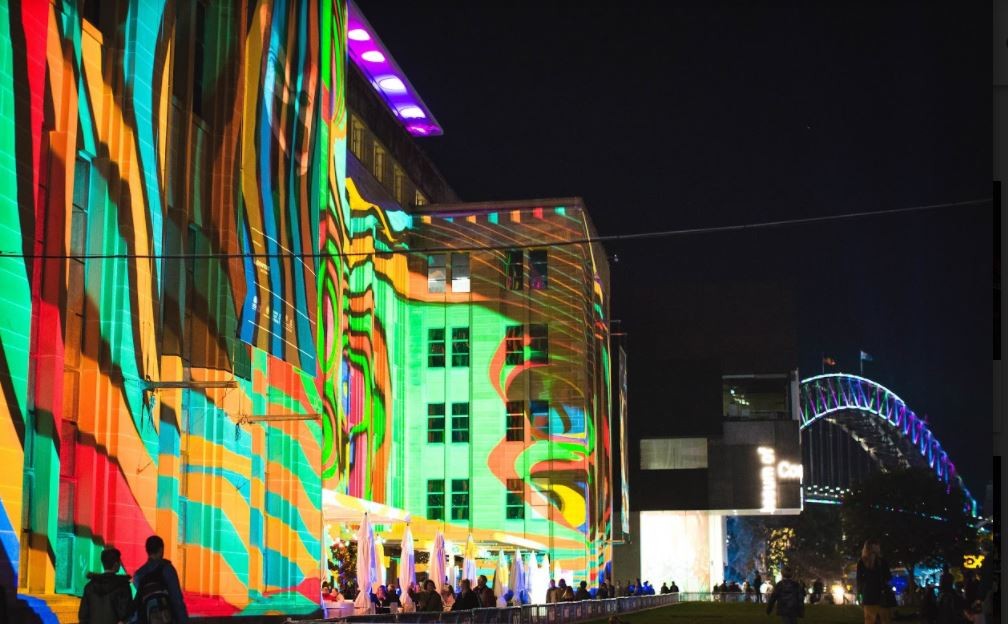 There’s no doubt we are playing to win in Sydney, and in May we celebrated the increased depth in our corporate leadership team, with new Sydney Blue CEO Jason Andrew sharing his vision for the harbourside, beaches and inner city markets at a network function at the Museum of Contemporary Art, coinciding with the magnificent Vivid Lights festival. 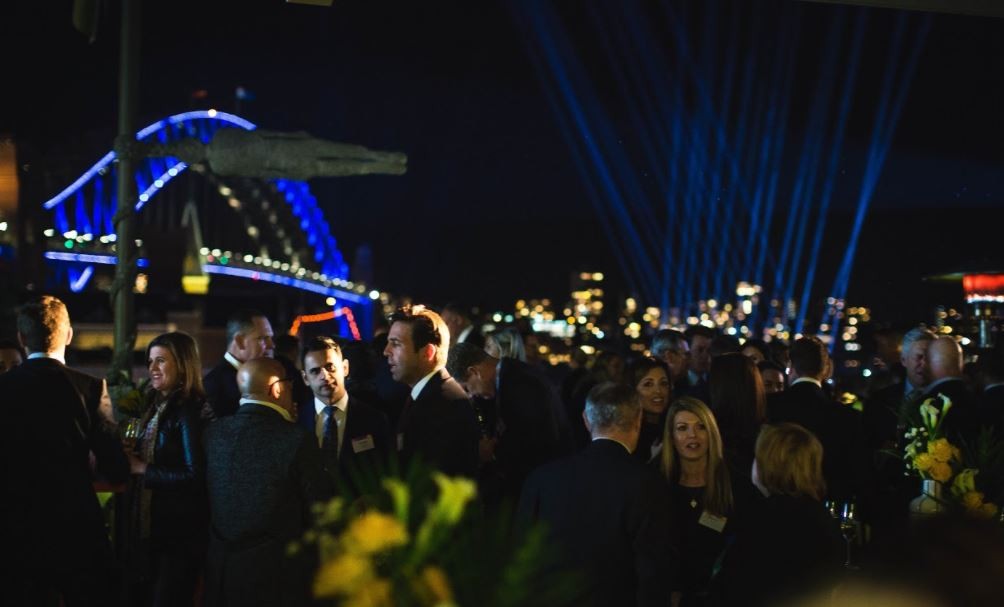 Victoria had a terrific month, lifting 30 per cent on the same month last year to $682 million and Queensland had a strong May with $813 million, down just three per cent over the previous May. Western Australia eased slightly to $92 million and South Australia booked $124 million for the month. And in the north west of Canterbury, Ray White Kaiapoi has opened under the network of Claire and Stuart Morris who currently operate offices in Rangiora and Pegasus.  In Australia, we opened six new offices. In Moorooka, in the south-west of Brisbane, the dynamic trio of Mark Kearns, Michelle Huston and Liz Cruse opened their business, pictured here. On the Gold Coast, Jared and Shallain Hodge  just opened their 11th Ray White business at Burleigh Heads.  And in Cronulla, five of the most successful real estate agents in the Sutherland Shire joined forces to open a business together. Matt Debreczeni and Gavin Ottaway, the owners of the Ray White Menai and Sutherland businesses, have teamed up with Matt Johnston plus Jill and Charlie Yankos to open in Cronulla – pictured here. 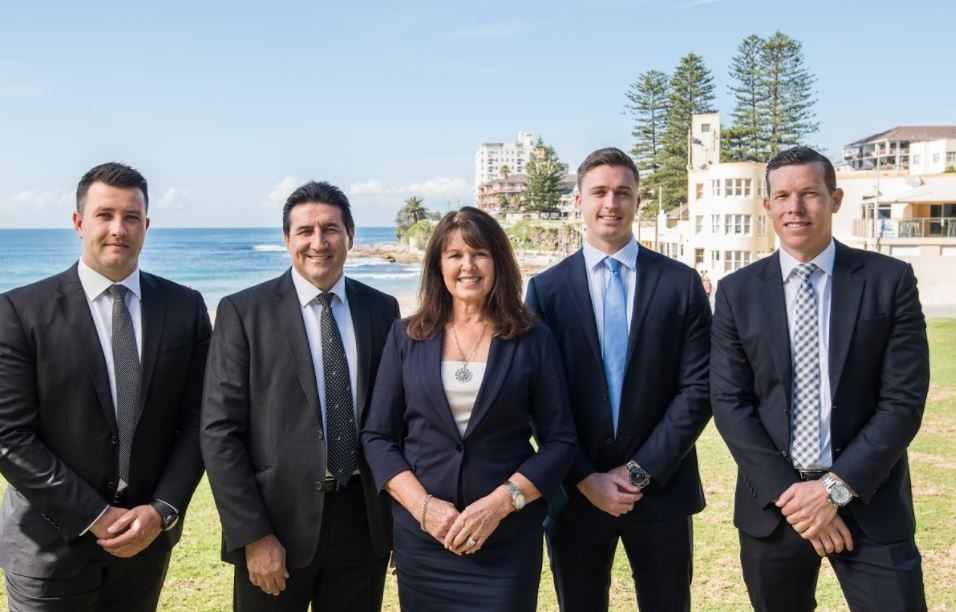 In Rhodes, we welcomed Jack Zhao and in Glenroy, young guns Ziya Koksal and Mete Karan have opened their new business. And it’s great to see Dee Nguyen, a lifetime Melburnian with a rich family history in the west of Melbourne, open Ray White Sunshine.

We continued our focus on customer satisfaction with another 2,300 vendors and buyers rating the Ray White service a 10 out of 10.  Our Net Promoter Score remains consistent at positive 77, with a record response rate of 37 per cent across the group. As part of our ongoing customer satisfaction and research, CEO of growth Mark McLeod received feedback from 1,000 vendor clients who had sold through us in the past month to find out why they chose Ray White.

The results showed 32 per cent decided to list and sell with us because of a referral or recommendation. The next highest category was those who had bought or sold through us previously at 22 per cent. If you add in those who listed with us because we’d sold a neighbour’s house (16 per cent), that number lifts to a staggering 70 per cent. So 70 per cent of our listings came to us through relationships we already have which is wonderful to hear.

Ray White Commercial traded just under $290 million in sales and leasing in May which is the best month of trading in the last two years.  A marathon auction that lasted over an hour and a half with 461 bids for development site at 169-173 Parramatta Rd, Haberfield, eventually achieving a sale price of just over $13M. And Loan Market recorded $1.251 billion in lodgements and settlements of $752.8 million.

Overall our refreshed national brand is looking fantastic in the marketplace. So far we have placed over 1000 full page press ads plus placed more than 1200 new signboards, which complement our new-look websites, proving print is such an integral part of the marketing process.

And who could forget #avogate? This was the month Cameron Crouch of Sherwood became an overnight internet sensation. Cameron earned himself no less than 77 news items in the space 3 days after he published an ad for two off the plan townhouses that he was selling that came with free avocado on toast at any local coffee shop in Sherwood for a year. He excited millennials all over the world. This ad ran first in the Courier Mail, and then it hit BuzzFeed and went viral with journalists chasing Cameron from New York, London, New Zealand and even Germany. 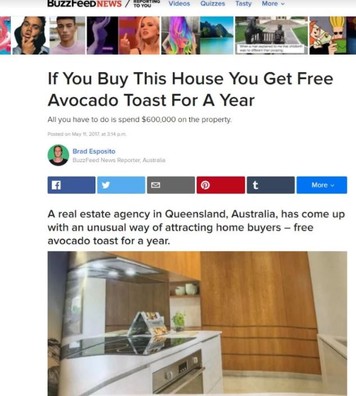 Well done Cameron, and everyone in the group, on a resoundingly successful month of May.